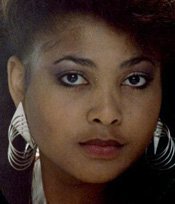 Loretta Marie Chandler is best known for her honest portrayal of ‘Dusty Tyler’ on the innovative television series “Fame”. You may also recognize her from guest appearances on a Movie of the Week called “Give Me My Child” staring Valerie Bertenelii, “A Different World, a Bill Cosby Production, Jerry Lewis Telethon or Lour Rawl’s Parade of Stars.

Loretta has been featured in numerous national tours, plays and musicals: “Dream Girls”, The Gospel Truth”, “Wait Until Dark”, “Brigadoon”, “Out Of The Frying Pan”, “Harlem Suite” where a special solo featured spot was created for her by the director and co-writers, Maurice Hines and Jennifer Holiday. And when she was featured as the lead soloist with the Philharmonic Orchestra in Los Angeles for their Christmas program. Another was when she earned a Drama-Logue Award for outstanding performance in the lead role of ‘Effie White’ in “Dream Girls.

Loretta started singing in her hometown of Pueblo, CO with her family’s gospel group, known as “The Chandler Family”, when we were younger, we were called the “Chandleretts”, ‘says Loretta.’ “Mom and Dad, Rev. F. L. Chandler and Mrs. Rosetta Chandler always encourage each of us to do our best with the gift God gave us.” Loretta, Cloretta, her sister and brothers, David and James have been performing since she was six years old. Loretta says, “It’s real special when we sing together, but time has not permitted us to perform as much as we would like to.”

After starting a gospel program at the University of Southern Colorado, Loretta decided to transfer to California’s Institute of the arts private college just outside Los Angeles, CA. There she founded and directed the Cal Arts Gospel Extravaganza and was looking into recording an album with a group when she decided to join some of her friends at an open call audition for “Fame”. The rest is history.

Tell a friend or family member abou us. Share the love!
more